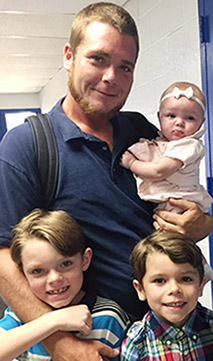 Zachary was born in Fernandina Beach and was a son of Mr. Alan K. Harrison and the late Michelle Fletcher (Harrison).

Zachary grew up in Yulee and attended Yulee High School. After school, he followed in his dad’s footsteps and became a carpenter. He was a lead framer for Parker Construction Company and will be remembered as a hard worker and a good carpenter.

While enjoying work, the true love of his life was his children. He spent time with them when he could even though his work required seven days a week sometimes. Zachary also liked to fish, spending time at the beach, or simply taking time to just “goof off.”

He leaves behind his children, Noah and Eli Harrison, and their mother, Kayla George, and Zae’lyn Harrison and her mother, Taylor Simmons; his dad and stepmother, Alan and Teresa Harrison; his brother, Hunter Ray (Jada) Harrison; and his paternal grandmother, Iaquate Harrison, as well as several aunts, uncles, and cousins.

At this time, the family is planning a small gathering of family to remember and celebrate Zachary’s life.