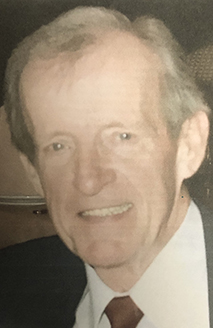 William F. Long departed life at his home, surrounded by family, on January 29, 2020.

He was born October 9, 1933, the eighth of nine children of Willard B. Long and Bertie Barefoot Long in Leonardtown, Md.

He grew up in St. Marys County, Md., where his father was a tobacco farmer and also owned and operated a laundry. When labor was scarce during World War II, much to the displeasure of his teachers, his father would take him and his siblings out of school to strip tobacco or help at the laundry when ships docked near the U.S. Navy base at Patuxent River and needed expedited laundry service.

Bill graduated in 1951 from Great Mills High School in Lexington Park, Md. He then served two years in the U.S. Air Force at O’Hare, after which he attended the University of Maryland in College Park, earning a bachelor’s degree in business administration with a major in personnel. It was there that he met the love of his life, Carol Langlois. They were married 60 years as of January 28, 2020.

He chose federal civil service for his career, recruiting employees, particularly engineers, for the U.S. Navy. He also assisted in and managed other human resource functions at Navy bases in Maryland, Washington, D.C., and Florida. His final assignment was at Camp Butler Marine Base in Okinawa, Japan.

After he retired in 1990 and returned home, he found work driving the elderly and disabled wherever they needed to go in the Jacksonville area. His passengers told him that his quick wit and sociability made their rides enjoyable.

Bill loved being on the water and he and his family spent many hours boating and camping along the waterways of Florida. He especially enjoyed the houseboat in which he and Carol traveled from their waterfront home in Yulee along the Intracoastal Waterway as far south as Melbourne, Fla. and as far north as Hampton, Va. He joined Flotilla 14 of the Coast Guard Auxiliary in Fernandina Beach and assisted in its patrols, boat examinations, and special events. Applying his working-day skills, he visited every high school in Nassau County to inform interested students about U.S. Coast Guard careers and the advantages of attending the Coast Guard Academy in New London, Conn.

Bill is survived by his wife; daughters, A. Lenora Miller (Richard), Cynthia Recupero (John), and Diana Platt (Mearl); grandchildren, Sara and Samantha Miller, Allison Recupero (Justin Esau), Julia Holthaus (David), and Carolyn and Nicholas Platt; and four great-grandchildren. He is also survived by a sister, Hilda Strickland of Baltimore, and many beloved nieces and nephews.

The family requests no flowers but welcomes memorials made in his honor to any organization dedicated to curing Alzheimer’s disease. More information can be found at curealz.org.

A celebration of his life is planned for a later date.