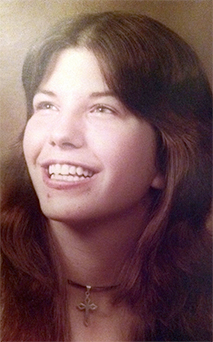 She was born in Kewanee, Ill. to the late Harlan Craig and Phyllis Ellenwood Craig.

Wendy grew up in Cambridge, Ill. and graduated from Cambridge High School in 1976. That same year, she married the love of her life, Jonathan Glenn Andree.

She worked for many years as a medical records analyst in Florida hospitals.

In her spare time, Wendy was a voracious reader, enjoying sci-fi, fantasy, and romance novels.

Wendy’s effervescent and sunny personality was well known. Even after her diagnosis with cancer, she bravely endured it all with a smile and a laugh. When Wendy went in for emergency brain surgery, Jon asked her to think of the best story she had ever read and to hold onto that through her surgery. She thought for a moment and told him, “The best story is the 43 years being married to you!”

Wendy and Jon packed in as much traveling as they could, visiting Niagara Falls, up through Ohio, over to the Adirondacks, Maine, Yellowstone, and Washington, D.C.

She inspired the people around her. When asked what her last words were, she proclaimed, “Joy to the World!” Those words truly summed up her bright and cheery disposition.

She was preceded in death by her parents; her sister, Eileen Craig; and her brother, Randy Craig.

Services to remember her life will be held at 11 a.m. Thursday, July 2, 2020 in the Burgess Chapel of Oxley-Heard Funeral Directors with Pastor Ida Iverson officiating. She will be laid to rest in Bosque Bello Cemetery.