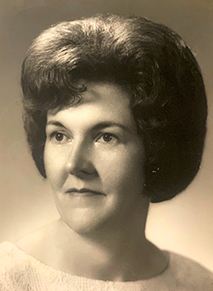 Martha Elizabeth Allen, 91, of Melrose, Fla., passed away Tuesday, November 17, 2020, at Park of the Palms in Keystone Heights, Fla.

She was born in Odenville, Ala., to the late Robie Ives and Annie Catherine Hazelwood Hawkins.

She graduated from St. Clair County High School in Odenville, Class of 1945, at the age of 16 and continued her education at Birmingham Business College, where she earned a degree in business and bookkeeping in 1946. She was employed at General Electric’s Major Appliance Division for more than eight years until 1963.

That same year, she met Herschel Allen in Fernandina Beach, Fla., and they were married in 1965.

She was preceded in death by her brother, Mabry Hawkins of Odenville.

She leaves behind her husband, Herschel T. Allen of Melrose; son, C. Kevin Allen and his wife, Christy, of McDonough, Ga.; and grandchildren, Sydney, 13, and Ashton, 11; as well as several nieces and nephews.

Services will be at 11 a.m. Friday, November 20, 2020, at Trinity Baptist Church in Keystone Heights. Her family will receive friends for the hour prior to the service at the church and again 2-3 p.m. at Oxley-Heard Funeral Directors in Fernandina Beach. She will be laid to rest in Bosque Bello Cemetery in Fernandina Beach.