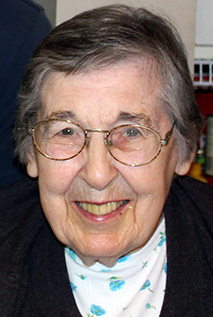 Margaretta Dewey Robbins, 97, of Amelia Island, Fla., went to be with her Lord and Savior, Jesus Christ, surrounded by loved ones at home on February 1, 2020.

Margaretta was born in June of 1922 to Aloney M. and Katharine (Anderegg) Dewey in Dickinson Center, N.Y., where she spent her childhood on a dairy farm. The eldest of five siblings, she attended school in a one-room schoolhouse doubling up on schoolwork to finish two years ahead of her class. She graduated with honors from Douglas College, now part of Rutgers University, with a bachelor’s degree in chemistry in 1942.

Margaretta was married to her husband, Robert D. Robbins, more than 62 years until his death in 2004. Together, they raised four children and helped found the Massachusetts Association for Retarded Children. They relocated to Amelia Island in 2004 with their son, Richard, who had Down syndrome, to live with their daughter, Kathy Jackson, after living in Greenville, S.C. for 33 years.

Margaretta was a friend to all she met and spent her life taking care of anyone who needed help. She spent hours everyday shuttling Richard and several others with Down syndrome to and from the sheltered workshop where they worked. She and her husband also took in basically anyone in need of a place to stay. She truly had a servant's heart.

A celebration of life service is scheduled for 3 p.m. Sunday, February 16, 2020 at First Baptist Church of Fernandina Beach. Interment will be at a later date.