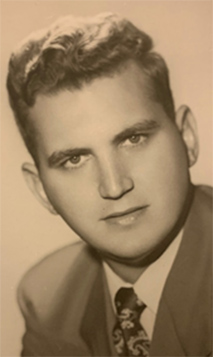 On Thursday, January 30, 2020, Louis Glauser, loving husband and father of four children, passed away at the age of 96.

Lou enlisted in the Air Force during his freshman year at the University of Missouri. While serving in the Air Force, he received the Purple Heart for wounds suffered on March 1, 1944. He once described the incident for a newspaper article: “We never made it, but we were headed for Berlin. It was the first American daylight raid on Berlin. We caught flak, and it put a hole in the turret. It was 41 degrees below zero. Up there in that slipstream you freeze pretty fast.” He suffered frostbite in his hands. Fortunately, they were able to save his hands but the injury would occasionally bother him on cold Missouri mornings. He served as an instructor for the remainder of his enlistment. Lou’s military service was a source of pride for the entire family.

In addition to his military service, Lou also took great pride in his accomplishments as a tackle for the University of Missouri Tigers. The 1945 team was the undefeated Big 6 Champion and went on to appear in the 1946 Cotton Bowl against Texas. They lost the game but Lou tackled future Hall of Famer Bobby Lane on a kickoff return. As Lou once said, “That was a big deal.” He would remain in Columbia, Mo. for most of his life and rarely missed a home game.

During lunch or on game day, Lou could be found at Booche’s enjoying a burger with a cold Stag. He frequented Murray’s for dinner in the evenings. He was fond of tailgating, rooting for Mizzou, weekends at the Lake of the Ozarks, and traveling with Marian and his children. He had a quick wit and was loved by all.

Lou was preceded in death by his wife, Marian; father, Louis; and mother, Lillie.

He is survived by his four children, Lauren, Randy, Cande, and Tammy; eight grandchildren; and 11 great-grandchildren.

A memorial will be held 4-7 p.m. Saturday February 8, 2020 at 3006 Riverside Drive in Fernandina Beach. The formal remembrance will begin at 4:15 p.m. with a Celebration of Life afterward.

In lieu of flowers the family recommends donations be sent to Cats Angels at 709 S. Eighth St., Fernandina Beach, FL 32034 or catsangels.com. He is also missed by his best bud kitty, Tom, who now lives with Lou's daughter, Cande.

Remembrances may be left on the tribute wall at eternityfuneralhome.com.