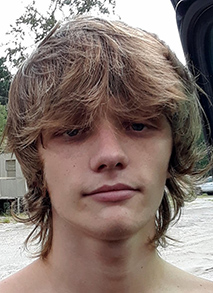 Born in Jacksonville, Fla., he was a son of Johnny Ray Anderson and Brianna Andrews Cole.

Ransom lived his entire life in Yulee and attended Yulee High School. He loved to fish, and no matter what, he lived life for the moment. He was especially excited about the plans he had to start a business with his mother.

He was predeceased by his grandfather, Frank Andrews.

He leaves behind his father, Johnny Ray Anderson of New Bern, N.C.; his mother, Brianna Andrews Cole of Callahan, Fla.; a brother, Dakota Vanwey of Yulee; sisters, MarLee Anderson of Switzerland, Fla., Brooke Anderson, and Layla Anderson; a sister, Ashley Hill, and a brother, Chase Hill, both of New Bern; his grandparents, Penny and Rick Abernathy of Yulee; and Johnny Anderson and Louise Toler, both of Advanceboro, N.C.; and his stepfather, Kenny Cole Jr., and his stepmother, Dawn Anderson, as well as several extended family members and friends.

Funeral services will be held at 11 a.m. Thursday, February 13, 2020 in the Burgess Chapel of Oxley-Heard Funeral Directors. The family will receive friends for the hour prior to the service. He will be laid to rest in Bosque Bello Cemetery.

The family asks that Ransom be remembered with contributions to the American Cancer Society.