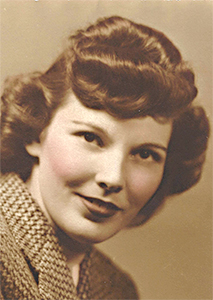 Marjorie Carrol Little Sapp Anderson, 97, of Newnan, Ga., passed away June 23, 2019 with the care of Southwest Christian Hospice in Union City, Ga. Her remains have been interred by Oxley-Heard Funeral Home in Bosque Bello Cemetery beside those of her devoted husband, Houston.

Ms. Anderson was born March 7, 2021 in South Bend, Ind. She moved with her husband, S. Houston Sapp in 1947 to Fernandina Beach, Fla., where they were active in First Baptist Church. Surrounded by his large and loving family, Marjorie and Houston resided in Fernandina Beach until 1966 when Houston accepted a new job in Palm Beach County, Fla. Houston predeceased Marjorie on November 5, 1987.

Initially a hairstylist and homemaker by occupation, Marjorie worked for many years at Verna’s Salon on North Sixth Street. Upon moving to West Palm Beach, she worked part-time at a number of area salons prior to opening her own business, which was her dream, on South Dixie Highway. She ended her entrepreneurial venture to care for ailing parents whom she and Houston moved to West Palm Beach.

Eventually, and at a time of life when many friends and neighbors were looking forward to retirement, Marjorie enrolled at Palm Beach Junior College and completed her Associate of Arts degree.

In 1989, two years after Houston passed, Marjorie married David Anderson of Hendersonville, N.C. Together, they traveled and played golf until David passed, whereupon Marjorie lived alternately with her children in Florida and Georgia.

Marjorie had two sisters and a brother, Lynn, Hylma, and Bill, each of whom predeceased her.

Because of the spread of the Chinese COVID-19 virus and various stay-at-home orders, no graveside service will be held at this time.